Key Stat:  Voorheesville outscored the Bengals 37-24 over the middle two frames in notching the victory. END_OF_DOCUMENT_TOKEN_TO_BE_REPLACED

With a break in the league schedule, a number of Wasaren teams took the floor on Thursday night in nonleague contests. It proved to be a tough night for league squads with only the Lady Panthers of Hoosick Falls notching a “W”.

Key Stat:  Thayne and Hickey combine for 49 points, leading the Falls who withstood 10 made threes in the game by the visitors from Vermont.

END_OF_DOCUMENT_TOKEN_TO_BE_REPLACED

Here’s a look at the Wasaren standings and it’s top five individuals and teams in selected categories.

Here’s a look at the Wasaren standings and it’s top five players and teams in selected categories. 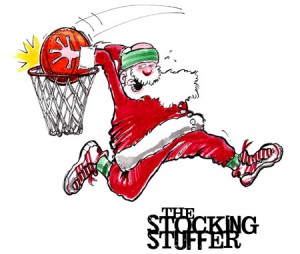 ‘Twas the night before Christmas and in the North Pole

final prep for the big night was taking it’s toll.

Santa and his crew were under the gun

getting gifts ready for holiday fun.

“We need a break”, said Santa, “from the holiday toil and stress

to ensure our package delivery is done with skill and finesse.”

“Surely a spirited run will do the trick.”

the reindeer rebound and run, it was something to see.

An opponent that’s worthy was next on the list

“I’ve got it”, yelled Santa with a shake of his first.

their best girls and boys will test us indeed.”

allowed Santa enough time to deliver to those who believe.

The all-stars were stacked with players that could score

Germaine and Phillips shooting the three.

The game was intense, spirted, well played throughout

Mrs. C and Coach Lilac had been dueling all night,

“We’ll run a down screen for Chris, Dasher you do the honor

if you don’t have a look Dear, go corner to Donor.”

But the Kringle Man was open and he bottomed his “J”

and then he and his reindeer ran to his sleigh.

“Thanks for the game”, called Santa as he drove out of sight

“And Merry Christmas to all and to all a good night.”

It’s been more of the same for Jimmer Fredette as the Glens Falls native continues to score at a high level playing for the Shanghai Sharks in the China Basketball Association.

On the season Jimmer has played in 23 games, averaging 38.0 points per contest, good for third best in the league.

The former BYU All-American is shooting .482 from the floor, including .429 from behind the arc and .942 from the foul line.  Fredette leads the league in steals at 3.4 per and adds 5.9 rebounds and 6.0 assists nightly.

The Sharks are 14-9 on the year with the league’s regular season just past the midway point.

Jimmer in a recent interview said he will finish his contract with the Sharks and would like to be on an NBA roster for the post season.  He went on to say, ” My confidence is at an all-time high.  I’m better than I’ve ever been as a basketball player.”

Commenting on the NBA Fredette said, “They’re shooting so many three-pointers and so much of it has to do with space, movement and transition.  It’s absolutely my style. I see their offensive systems and everyone can use another shooter, another scorer.”

Here’s hoping that an NBA general manager has similar thoughts and maybe one day this spring the “lonely master”, as he’s called in China, will return states side and come off a bench to get buckets for his team, somewhere in The Association.

Tamarac used a 23-7 second period to take control, on their way to posting a comfortable 64-51 road victory over the Cardinals of Fort Ann on Saturday.

Luke Loso with 16 points and Ritchie Jones with 11 points paced the 8-2 Cardinals.

Plenty of Wasaren teams were in action Friday night with most competing in non league runs as the conference schedule breaks for the holidays.

Key Stat:  Thayne produces another double double with 39 and 18 rebounds, connecting on 16 of 26 from the floor and single-handedly outscoring Crane.

Key Stat:  In the comeback win for the Bengals, the Valley led 31-21 at half, the free throw line was key with Tamarac converting on 19 of 27 while the Indians were 15 of 17.

Key Stat:  The Raiders run out to a 21-10 advantage after one on their way to the non league “W”.  Four Raiders in doubles for a Mechanicville team that’s playing good basketball.

Key Stat:  Whitehall owned the only double digit quarter of the night outscoring the Saints 13-7 in the second and rode the cushion to the win.

Key Stat:  Waterford puts three players in doubles, connects on nine 3-pointers and uses a 25 point first period to run away from Northville.

Another night with a full slate for the Wasaren boys, and with it, another Hoosick Falls victory to run their league winning streak to 44 straight and 74 of their last 76.

Key Stat:  The Falls trailed 41-39 entering the final period but clamped down defensively, holding the high-scoring Bengals to five points in the period, while putting 19 on the board themselves in securing the well-earned “W”. END_OF_DOCUMENT_TOKEN_TO_BE_REPLACED

Key Stat:  The Witches kept Berlin off the board in the first period while scoring 26 themselves on their way to the easy “W”.

Key Stat:  The Bengals led 25-18 at the break and held off the Falls over the final two quarters.  Tamarac knocked down 6 of 12 from behind the arc and converted on 12 of 18 from the foul line, while the Panthers were just 1 of 2 from the stripe.