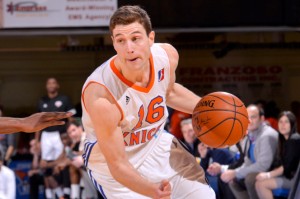 How dysfunctional is the New York Knicks organization?  On the court it’s plain for all to see their inability to compete for the past month of the season.  The Knicks have dropped 15 of their last 18 contests, riding a downward spiral to a 25-37 record with 20 games left to play.  Their play has been disjointed and inconsistent, with a total lack of communication.  Those same characteristics directly apply to the front office and coaching staff of the team, most recently regarding the Jimmer Fredette signing.

When Fredette signed his 10-day contract head coach Kurt Rambis couldn’t have been less supportive, rambling on that he had no intentions of playing Jimmer ahead of someone who had been with the team all year.  Rambis added that he wasn’t going to put Jimmer in unless he could provide something better than what others had shown.

I’ll give coach Rambis credit, at least in this case of being true to his word, playing Fredette only five minutes total in the five games the Knicks played with Jimmer on their roster.  New York lost four of the five, three of the blowout variety, yet there was no room for Jimmer.

No room despite the embarrassing play of the Knicks backcourt.  Jose Calderon, Langston Galloway,and  Sasha Vujacic, were at it again in last night’s 104 -85 loss to the Trail Blazers combining to shoot a miserable 2-16 from the floor.  Earlier in this five game stretch the same three players failed to score at all, despite playing big minutes.

Coach Rambis had openly questioned Jimmer’s ability to guard, intimating that would keep him from receiving playing time, yet last week the Toronto backcourt lit up the Knicks as did the Portland guard tandem of Damon Lillard and Ray McCollum last night to the tune of 55 points.

So your guards struggle to score, aren’t stopping anyone defensively and there sits a guy you just signed to a 10-day contract off you own D-League squad.  A squad that shares a practice facility with the Knicks, meaning the parent club full well knows what Jimmer is all about as a player and individual.

Someone in the front office wanted Fredette on the roster, but Rambis treated Jimmer like a shirt somebody had purchased for him that he really didn’t want.  He’d never wear it, maybe around the house one day, but what he really wanted was to take it back to the store for a refund.

Well the Knicks won’t get a refund on the Fredette deal, but in essence did send him back, not resigning the Glens Falls native to another 10-day, precipitating his return to the D-League.

The question on most people’s minds is why?  Why sign Jimmer, a player on your own D-League team that you know inside and out, if you’re going to give him five minutes, over five games?

Four of those contests were played in New York where every night “We want Jimmer” chants rose from the crowd. The Garden faithful along with the rest of us tired of the backcourt play, wanted to see what the former BYU star could do.

Seems logical to me, apparently not so to the dysfunctional New York Knicks.